What caused the mass death?

15 October is Blog Action Day and everyone is encouraged to blog about the environment on this day. I thought I can make this opportunity to share something related to environment changes. Chek Jawa, an intertidal flat with six ecosystems within one kilometer square area, is found east of Pulau Ubin, an offshore island to the Northeast of mainland Singapore. Being a fascinating getaway from the concrete jungle, it holds a special place in the hearts of Singaporeans. Fortunately, Chek Jawa has escaped the verdict from being buried by slated reclamation through the ten year deferment. On January 2007, an incident of mass mortality was reported at Chek Jawa by volunteers on blog posts.

Ria has also kindly posted her photos on Wildsingapore's flickr account with regards to the mass death event.

So the BIG question is, what caused the mass death. Of course everyone pointed fingers to the heavy downpour that rain like mad during the rainy season. Because marine creatures need saline conditions to thrive, if there is too much rain, salinity will decrease, and animals more sensitive to salinity drop will take in water due to osmosis till a point they burst and die.

But the bigger question is, is the drop of salinity the cause of the mass death? This is because algal bloom, change in sea temperature, toxins, pollutants, disease or de-oxygenation also can kill the animals.

After a visual assessment at Chek Jawa in February 2007, Dr. Dan Ritshoff, of Duke University, suggested in his blog post, "Will Chek Jawa Rebound?", that salinity change was the culprit, “the easiest animals to assess at Chek Jawa are the sessile or virtually sessile signature animals. All these animals are sensitive to low salinity because they conform to the environment around them- carpet anemones, peacock anemones, sea cucumbers, and button shells. These have all been more than decimated. I saw two (20 cm diameter) small very healthy carpet anemones, several dozen Peacock anemones, two sea cucumbers and no button shells. Hopeful signs, the peacock anemones were clearly healthy and there were three new 3 cm carpet anemones.” Last December and January, the northeast monsoon was intensified twice in 17-20 December and 11-14 January due to strong surge events over South China Sea. According to Malaysian Meteorological Department (2007), it was due to strong convergence and cyclonic wind events emanating from high pressure system over Siberia. Therefore, Kota Tinggi experienced serious flooding (picture from this link). Then another question, if the rain is so bad, is there mass death, say at Semakau? at St John Island? at Kusu Island? Why?

In fact, not only does the rain played a role, the locality of Chek Jawa made matters worse that induces the mass death. In red is Chek Jawa on Google Earth. In pink is Sungei Johor or Johor River. Can you compare the catchment size with the size of Singapore? From a consultation session with Professor Wong Poh Poh, a coastal geomorphologist from Geography Department, National University of Singapore, we concluded that most the flood water gets discharged directly at Chek Jawa if you follow the suggested red arrows. The effects were emphasized as Tekong reclamation made the channel for output of river flow narrower.

In the event of a low tide and the excessively heavy rainfall, the volume of freshwater from the river, amplified by the rains will gush out and into the Straits. it is possible then that Chek Jawa will turn into a "swimming pool" of freshwater, inundating the marine creatures long enoug to pose an osmotic challenge, and even killing off the less adaptable ones.

Therefore, mass death occured in Chek Jawa and not in the Southern Islands where the latter's salinity is higher with no river output near them.

How about other northern shores?

Beting Bronok, Changi and Pulau Sekudu were also affected, but to a smaller scale as compared to Chek Jawa. Why then? If you follow the suggested discharge direction as above, it is directly mostly at Chek Jawa due to the geography of the coastal layouts. Surprisingly, it was speculated that Beting Bronok was not as badly affected (due to its location away from the main discharge flow though it is geographically closer to the river mouth) as compared to Chek Jawa because Beting Bronok's knobbly sea stars still survived! Unfortunately, those in Chek Jawa were never seen again after the mass death, the last few or one was photographed by Ron Yeo in this blog post Death Note from Chek Jawa where the knobbly sea star turned black like ashes.

Now another big question. Is global warming the cause of it?

I read a preliminary analysis by Tetsuzo Yasunari (2007) mentioning that the heavy rainfall this Jan is due to the intensified Northeast monsoon season leading to strong cold surge events, where there were strong convergence and cyclonic wind events emanating from high pressure system over Siberia, thus causing the intensification in the northeast monsoon.

However, in terms of whether global warming is the cause of it, Tetsuzo Yasunari stated that there is no clear trend from past 40 years data of rainfall data both in amount and frequency with respect to the Malaysian Peninsula. However, in Vietnam and China, a trend could be observed.

I came across another article online titled "Rising temperature in Indian Ocean may have caused Johor floods" by Royce Cheah, on thestar online news webpage, describing about the disturbed Great ocean conveyor belt being related to the heavy rainfall, and this was likely due to global warming.

In response to the above two articles, Professor Matthias Roth, a climatologist with National University of Singapore commented on an email reply to me,

"I am not sure if you can draw conclusions from these 2 articles regarding what is happening in the Singapore region. More data ( i.e. longer observational time series) are needed to conclude that the intensified NE monsoon rains early in 2007 are related to atmospheric changes induced by global warming."

Nevertheless, Chek Jawa is on the road of recovery and we welcome and embrace it to return back to its wonderful state. It is alive and it deserves our respect to understand it as a place that does not deserve to be buried with sand for reclamation. There is so much we can learn and enjoy out from it.

Posts during Feb-March about Chek Jawa after mass deaths 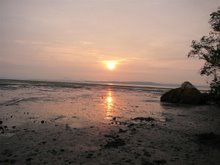 Most likely due to heavy period of rainfall during Dec/Jan 2007, many of the marine creatures died in Chek Jawa due to osmotic pressure.

Click the links below to read more about what happened:

2. Article on Nature Watch on Life and death at Chek Jawa.

Thus this project aims to study the mass mortality and recruitment of macrofauna for example like carpet anemones.

This project is not just for my UROPS assignment in National University of Singapore, but also for the long run monitoring and understanding of Singapore's favourite shore, Chek Jawa in Pulau Ubin.

My supervisors are N. Sivasothi, Peter Todd and Dan Rittschof.